Romania 2020 "Institute Of Speleology 'Emil Racovita' A Century Of Research"

In order to honour the centenary of a famous Institute under the aegis of the Romanian Academy, Romfilatelia introduces into circulation on Thursday, June 18th, 2020, the postage stamps issue entitled Institute of Speleology “Emil Racovita”, a century of research. 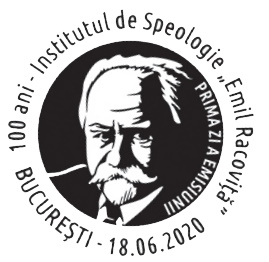 The Institute of Speleology “Emil Racovita”, the first of its kind in the world, owes its existence to the genius of the great scientist Emil Racovita (1868-1947), biologist, polar explorer and founder of biospeleology, the creation of this institute being enshrined in a special law, enacted on April 26th, 1920 by King Ferdinand I.

In the early years, the institute functioned as a component part of the Faculty of Sciences within University of Cluj, representing the official framework in which its founder also moved the headquarters of the “Biospeologica” Scientific Society, which he had founded in 1907, as an international tool to coordinate the activity of all zoologists interested in the study of underground fauna.

Along with Emil Racovita, two eminent biologists carried out their activity in the institute in Cluj: the French René Jeannel, entomologist and biogeographer, and the Swiss Pierre-Alfred Chappuis, a specialist in underground aquatic fauna.

In 1940, following the Vienna Dictate, Racovita was forced to take refuge in Timisoara, taking with him the archives of the institute, the “Biospeological” collection remaining in Cluj guarded by P.A. Chappuis. Racovita returned to Cluj bearly in 1945, suffering along with his institute all the deprivations of poverty and post-war inflation. After Racovita’s death in 1947, the institute slowly declined, especially after Chappuis left Romania, in 1949.

In 1956, at the initiative of professors Traian Orghidan, Margareta Dumitrescu and Valeriu Puscariu, the institute was reorganized under the leadership of Professor Constantin Motas (1891-1980), in its new structure having the headquarters in Bucharest and a section in Cluj. A year later (1957), the Institute of Speleology received the name of its founder, Emil Racovita, and in 1960 it passed under the aegis of the Romanian Academy. After 1963, the directors of ISER were professors Traian Orghidan and Margareta Dumitrescu.

Within the postage stamps issue, made up of four stamps, representative images from the caves of Romania are depicted, of great importance for the speleological research activity. The illustration of the postage stamps included in the issue is made in a graphic attractive to collectors, with elements reproduced with a special colour - UV yellow.

On the stamp, with the value of Lei 8.50, shows the cave bear skulls found in the Rece (Cold) Cave, the bear being the representative mammal of the last Ice Age in the Carpathians.

The Rece Cave is located on the left slope of Cutilor Gorges, from Rosia Township, Bihor County.

The second stamp of the issue with the face value of Lei 3.30, a parietal painting from Coliboaia Cave (Bihor County) is reproduced, in which can be seen a woolly rhinoceros - Coelodonta antiquitatis (Blumenbach, 1799), and the painting is approximately 33,000 years old, one of the oldest rupestrian representations in Europe.

Stalactites and organ-like columns adorn the entrance to Paradisului (Paradise) Gallery in Piatra Altarului (Altar Stone) Cave, Bihor Mountains, Cluj County. The cavity hosts crystals and calcite formations that can reach perfection, comparable to the most famous in Europe.

The calcite organ, located in Paradisului Gallery from Piatra Altarului Cave (located in Bihor Mountains), is reproduced on the stamp with the face value of Lei 5.
The last stamp of the series, with the face value of Lei 12, stands out the largest gours, or rimstones (large-sized calcite basins) in Romania, located in the Mendip Hall from Sura Mare Cave, Sureanu Mountains, Hunedoara County. Gours are formed by the precipitation of calcium carbonate dissolved in water that drips on a sloping wall.

On the First Day Cover, huge stalagmites are illustrated, located in the Mammoths’ Hall, the Cave from the Darninii Wall, Bihor Mountains, Alba County. The mammoths are massive domes and stalagmites made of calcite and mondmilch, among the largest of this kind in Romania. Romfilatelia thanks Institute of Speleology “Emil Racovita” and Mr. Cristian Lascu, associate researcher, for the documentary and photographic support granted to the achievement of this postage stamps issue.