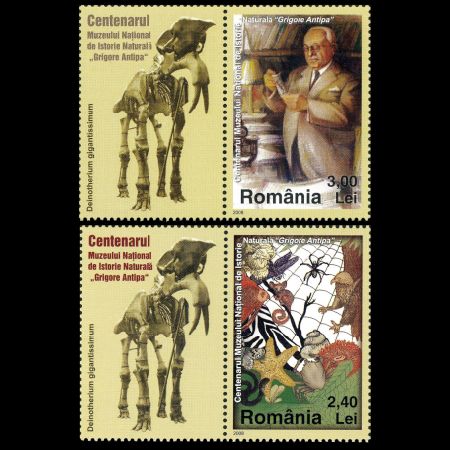 One hundred years ago, in the presence of King Carol I, King Ferdinand, and Princess Maria, the National Natural History Museum would officially open its doors in a new "Highway" building.
To celebrate the event, Romfilatelia introduces into circulation the postage stamps issue Centenary of the "GRIGORE ANTIPA" National Natural History Museum.
The history of the museum goes further back in time, in 1834, when the ruller Alexandru Ghica endorsed the setup decree of the National Museum Bucharest. The first collection's curator was Carol Wallenstein de Vella (an Austrian of Croatian origin) in 1837. Then followed the tutor Carlo Ferrerati (Italian) in 1860, and in 1867, Prof. Gregoriu Stefanescu was elected museum director. In 1893, Grigore Antipa was appointed director of State Zoological Collections. One year later, these collections are moved to new headquarters, in a building on Polona Street. The construction of the new headquarters in Victoriei Square begun in 1904 and the building was finalized and inaugurated within four years and it was designated as the Museum of Zoology. With the inauguration of the museum, the first zoo-geographical dioramas in the world were revealed (Tundra, Prairie, African Savannah, and Sahara) and due to their high quality served as a model for many museums in the country and outside its borders.
6 years after this event, in 1914, occasioned by the inauguration of 11 new presentation halls, King Carol I grants a new name to the institution, namely the National Natural History Museum.
In 1933, as a recognition of Grigore Antipa's merits, King Carol II names the museum after the famous scholar biologist, evolutionist, ichthyologist, ecologist, oceanologist, museum's custodian and economist. 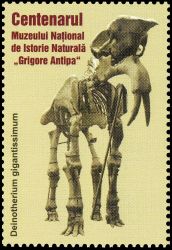 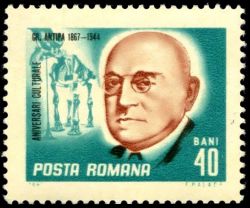 Note: a tab on upper-left corner of each mini-sheet shows fossil of Dinotherium giganteum - the most impressive exponats of the museum. First time this fossil was depicting on Romania's stamp on 1967.