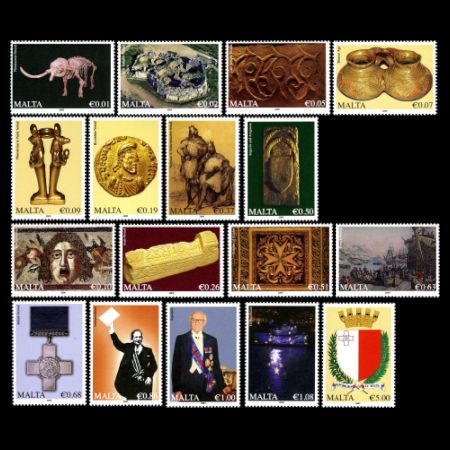 These stamps issued in separate mini sheets of 10 and one sheet with all 17 values.

The set of 17 stamps tracks Malta's historical phases and milestones by depicting their related iconic images.
"This remarkable set of stamps offers a philatelic and historical timeline while also confirming that a small postage stamp can succinctly tell a major story" said Joseph Said, Chairman, MaltaPost p.l.c.
To celebrate this new Definitive Set, MaltaPost, in collaboration with Midsea Books Ltd, is publishing a book titled "The Historical Collection Celebrating Malta's Heritage Through Stamps". The book, also to be released on 29 December, narrates Malta's history through a number of essays by specialist historians. A uniquely numbered Souvenir Sheet bearing the 17 stamps will also be included in the first 2,500 numbered copies of this publication. Both the Souvenir Sheet as well as the book bear a matching number. 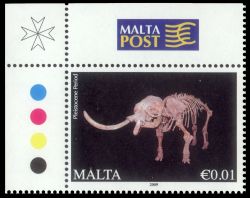 Fossil Elephas falconeri dwarf skeleton is depicting on one of the stamps with a face value of Euro cent 1 (€0,01).
This fossil-found in Ghar Dalam cave which located on the outskirts of Birzebbuga, Malta containing the bone remains of animals that were stranded and subsequently became extinct on Malta at the end of the Ice age. Dwarf elephant, hippopotamus, deer and bear bone deposits found there are of a different age; the hippopotamuses became extinct about 180,000 years ago, whilst the deer species became extinct much later, about 18,000 years ago. It is also here that the earliest evidence of human settlement on Malta, some 7,400 years ago, was discovered.
The cave was first scientifically investigated in 1885 but was not opened to the public until 1933. It was used as an air-raid shelter during World War II. A museum was set up on site by the then curator of Natural History Dr J.G. Baldacchino. In 1980, the most important and irreplaceable relicssuch as four tusks of dwarf elephants and the skull of a Neolithic childwere stolen from the museum.
The cave was investigated in 1987 under the direction of Emanual Anati, Professor of paleontology at Lecce University. His team of Italian archaeologists from Centro Camuno di Studi Preistorici discovered Palaeolithic cave art depicting human hands, anthropozoomorphic, and several animal designs from underneath the stalagmatic formations. Some depict elephants which have been extinct in the Maltese region since the Pleistocene.

This stamp reprinted in 2011 and 2015. New stamps have some design differences, for example the logo of Malta Post at top-left part of a mini sheet.