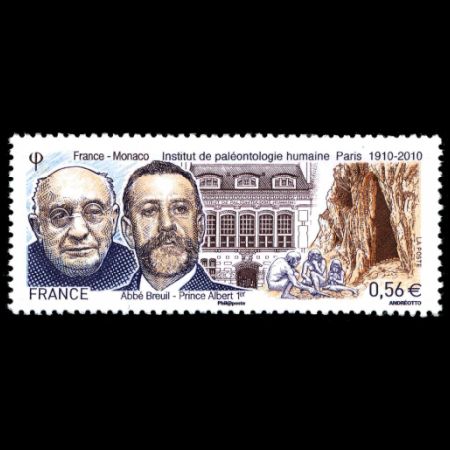 On June 2nd 2010, Post authority of France issued a joint issue stamp with Monaco "Institut de paleontologie humaine 1910-2010" (Monaco issued their stamp one fay earlier on June 1st). Both countries produced some FDC with both stamps and two postmarks, of France and Monaco, on it. The stamp shows portraits of founders of the Institute of Human Paleontology (HPI) and the Grimaldi caves surrounding the front of the HPI:Albert 1, Sovereign Prince of Monaco, and the Abbe Breuil

The Institute of Human Paleontology is a research foundation devoted to the study of human paleontology and prehistory. In 2010, HPI was a hundred years. It was created in 1910 mainly by Albert 1er, Sovereign Prince of Monaco, and Abbe Breuil (both are depicting on left side of the stamp). This commemoration is an opportunity for a joint issue with the Principality of Monaco. The HPI Headquarters in Paris in a building built in 1912 by architect Pontremoli and decorated with bas-reliefs by sculptor Constant Roux.L institute's research mission on the ground (archaeological sites) and in laboratories, conservation products of excavation (collections of prehistoric artifacts and bones), dissemination to the greatest number of research results (scientific meetings and publications, exhibitions, public lectures, international exchanges ...) and training of future prehistory.