Skull of prehistoric human on postmark of Bophuthatswana 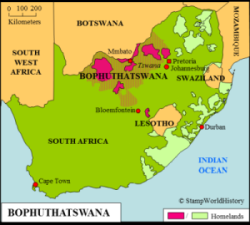 Contents:
Bophuthatswana, officially the Republic of Bophuthatswana, was a Bantustan and nominal parliamentary democracy in the northwestern region of South Africa. Its seat of government was Mmabatho.
Bophuthatswana was the first area to be declared an independent state whose territory constituted a scattered patchwork of individual enclaves. During its last days of existence, events taking place within its borders led to the weakening and split of right-wing Afrikaner resistance towards democratizing South Africa. In 1994, it was reintegrated into South Africa, and its territory was distributed among the new provinces of the Orange Free State (now Free State), Northern Cape, and North West Province. [R1]

The South African homelands of Bophuthatswana issued its own stamps between 1977–1994. There are no Paleontology related stamps issued by the country, but a special cover and commemorative postmark for the “60th anniversary of Australophithecus discovery in Taung” was released in 1985.


Notes:
[1] On February 4th 1985 post authority of Bophuthatswana issued commemorative cover and postmark with title "60th anniversary of Australopithecus discovery in Taung".
This commemorative cover includes an insert page inside the cover. The insert has a short description of the event in English and local languages. The English text for this cover is below:

On 3 February 1925 the Johannesburg newspaper The Star announced the discovery of a new species of hominid, Australopithecus africanus, the southern ape of Africa. An account of this species by Professor Raymond Dart was published by the London scientific journal Nature on 7 February 1925.
Professor Dart based his findings on the examination of a fossil skull found by M. de Bruyn in the Buxton lime works near Taung in November 1924. It was embedded in sandy limestone from which fossil baboons had previously been recovered. Professor R.B. Young, of the Witwatersrand University, took the pieces of rock to Professor Dart, Head of Anatomy at that University. He spent a month extracting the fossil from the rock. The skull revealed was of a small-brained creature which carried its head upon an upright spine; although its brain Size was no bigger that of a chimpanzee, it differed from apes in going on two legs instead of four.

Nothing like it had been seen before. Dart regarded it as a new kind of ape which showed human-like features in teeth, carriage of head, and form (though not size) of brain. The Taung specimen's teeth showed that it was probably only 5 years of age when it died. When, subsequently, adult specimens were found in the Transvaal and, later, in East Africa, careful study showed that these upright-walking, small-brained creatures were closely related to the family of man. They lived in Africa between one million and four million years ago.

The discovery of the Taung skull and the recognition of its unique features signified a break-through in man's study of his origins. The diamond jubilee of this event was celebrated at an international symposium arranged by the Witwatersrand University and the University of Bophuthatswana and on 3 February 1985 anthropologists from all over the world attended the unveiling of a memorial plaque marking the Taung Site, by President Lucas Mangope of Bophuthatswana. On 4 February 1985 (the 92nd birthday of Professor Dart) this commemorative cover and special date-stamp were issued to mark the 60th anniversary of the discovery of one of Africa's most important fossil skulls.