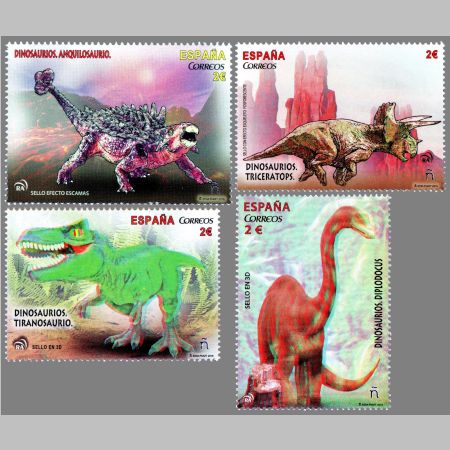 On May 7, 2015, Post Authority of Spain issued the first stamps of Dinosaurs. The set contain four stamps each one printed with different technique: scales texture, Augmented Reality, phosphorescence, 3D and special glasses, which allows to some of the effects.

All of the dinosaurs shown on the stamps are "classical", well known to wide public, but fossils of none of them are found in Spain. The dinosaurs are depicting at "children draw" style, another weakness of these stamps is the price. Euro 2 each it is very expensive even for European country and make their postal usage very limited. Seems as they issued with a purpose to be sold for collectors, rather to be used on letters, therefore these stamps are marked as undesired.

These stamps, as well as the book "A dinosaur in your mailbox", presented to a public on 47º Expo National stamp fair in Madrid. This year, the main theme of the fair was linked to these prehistoric animals, with the intention of attracting the children and young people in addition to those interested in philately.

Official description of these stamps is:
"The Earth was once inhabited by strange prehistoric creatures that suddenly died out around 65 million years ago. They were the dinosaurs or "terrible lizards", a compound Greek word first used by scientist Richard Owen in 1842. This stamp series will continue next year and is issued using novel printing techniques such as phosphorescent stamps, scale textures, 3D and Augmented Reality (AR). Dinosaurs dominated the Earth during the Mesozoic or Secondary era. Although now extinct, the fossils found on every continent and the work of scientists have enabled us to discover how these animals lived." written by Yolanda Stephanie. Library of Postal and Telegraph Museum