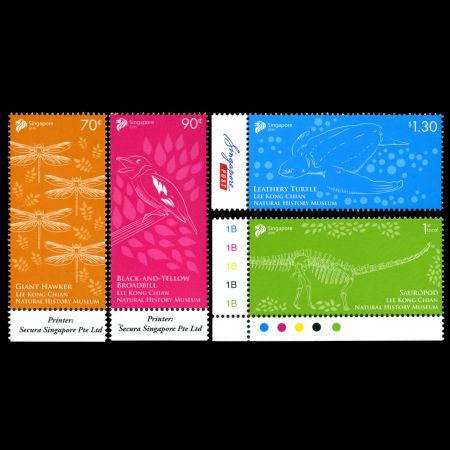 To commemorate the opening of Singapore’s first and only natural history museum, Singapore Post Limited (SingPost) released a new stamp issue entitled Lee Kong Chian Natural History Museum on 18 April 2015. Built at a cost of about $46 million, the museum was funded with support from the Lee Foundation and private donors.
The roots of Lee Kong Chian Natural History Museum go back to the “Singapore lnstitution" envisioned by Sir Stamford Raffles in 1823. This was renamed the Raffles Library and Museum, and opened in 1887 at Stamford Road. It soon became a focal point for zoological and anthropological research in the region. Until 1965, it was a bastion of South-east Asian biodiversity studies, with a substantial zoological collection, an impeccable research record and its own international journal, the Bulletin of the Raffles Museum. Singapore's independence saw it become the National Museum, and the zoological collections and displays were moved to the Singapore Science Centre and the University of Singapore in the early 1970s. The National University of Singapore inherited most of these collections and consolidated it as the Zoological Reference Collection (ZRC). The ZRC’s present premises were opened in 1988 by the then Minister of Education, Dr Tony Tan. ln 1998, NUS expanded ZRC’s role by making it a research facility and the Raffles Museum of Biodiversity Research was established. The Museum’s collections grew rapidly as research expanded, material obtained through numerous regional collaborative expeditions and projects, exchanges with other institutions, as well as donations by the public and naturalists. The new Museum's primary public role will be to engage visitors on issues on biodiversity, environment and conservation in and of South-east Asia. With an iconic rock-like building, it will be a one-stop exhibition, education and research facility servicing a multitude of biodiversity activities in Singapore and the region.

The doors of the Republic’s first Natural History Museum officially opened on Saturday Apr 18 for VIP visitors (a group of 250 invited guests. They included President Tony Tan Keng Yam, Ambassador-At-Large Tommy Koh and experts from museums around the world) and on April 28 for a public, giving visitors the opportunity to see centuries-old exhibits from a unique collection, most of which has never been seen before. The Lee Kong Chian Natural History Museum, the region's first such museum, showcases about 2,000 historic exhibits. First mooted by Sir Stamford Raffles, the collection of South-east Asian biodiversity began in 1849 at the Raffles Museum.
The Lee Kong Chian Natural History Museum at the National University of Singapore strives to be a leader in Southeast Asian biodiversity, conservation research, education and outreach. Home to three rare dinosaur skeletons and over a million plant and animal specimens, the museum is a splendid showcase of the region’s natural history and rich biodiversity.

The trio of diplodocid sauropod dinosaur skeletons - Prince, Apollonia and Twinky, the skeletons are more than 80 per cent complete - a rarity as far as dinosaur discoveries go. At 12m in length, it is the smallest of the trio of diplodocid sauropod dinosaurs, next to Twinky is graceful Apollonia, its 24m-long frame reaching up to overlook the museum’s mezzanine. Then there is Prince, all 27m of “alpha” male, stretched in a seemingly lazy manner across the centre of the 2,000 sq m exhibition space. Their easy poses belie the efforts of a team of almost 30 museum staff, professional art movers and dinosaur experts to set up the exhibit – the star attraction of Singapore’s first and only Natural History Museum. Research associate Martyn Low, 33, said it took the team two weeks of 12-hour days last August to assemble the fossils of the three giants, which arrived in Singapore in 53 crates between 2012 and 2013. There were more than 1,000 elements to the three 150-million- year-old skeletons, with some bones weighing more than 200kg. The heaviest was the sacrum (the pelvis and the bones fused to it). It was the first piece to be mounted on each of the three frames, with the help of a chain block and two “spidermen” – professional art movers trained to walk on the frame, said project manager Tan Swee Hee, 43. Due to its weight, getting the sacrum positioned was a challenging task. “But once the sacrum was in place, the vertebrae and tail grew from both ends very quickly,” Mr Low said. The work was as challenging administratively, as it was physically. “Every single bone needed to be kept track of, as each one is an asset,” said Mr Low. The dinosaurs were acquired for about $8 million in 2011 from Dinosauria International, a Wyoming-based fossil company that found the remains between 2007 and 2010 in Ten Sleep, a town in the American state. The bones were wrapped in paper towels, then encased in a protective plaster and burlap cast called a jacket so they could be transported without being damaged. Each jacket was marked for identification and moved to the lab where it was removed using a cast cutter. Workers then painstakingly chipped rock away from the bones using an air scribe. A consolidant, or a strengthening liquid, was then used to preserve and harden the fossils. When the bones arrived in Singapore, they were kept in a temperature-controlled warehouse in Tagore Lane until their new home was ready for them last year. Before the bones could be mounted, experts like “dinosaur builder” Brock Sisson had to design the “poses” that would bring them back to life. “We worked with the museum on making (the dinosaurs) interact, and came up with a design for the family group,” said the American. The dinosaur trio were found together, and could well have been a family. At the museum, Prince looks as if it is welcoming visitors, while Apollonia watches over Twinky at play. Said Mr Sisson: “The main hall where the dinosaurs are is a great space – it’s going to showcase the exhibit very nicely. “I’ve been to other museums where the dinosaurs are just in a big room, but they fit very nicely here and fill the space – it’s going to be a neat exhibit.”


Other stamps:
Three other colourful stamps highlight iconic animals in the museum: the Giant Hawker dragonfly (S$0.70), the Black and Yellow Broadbill (S$0.90) and the Leathery Turtle (S$1.30).

The leatherback sea turtle (Dermochelys coriacea), sometimes called the lute turtle or leathery turtle, is the largest of all living turtles and is the fourth-heaviest modern reptile behind three crocodilians. It can easily be differentiated from other modern sea turtles by its lack of a bony shell. Instead, its carapace is covered by skin and oily flesh. Relatives of modern leatherback turtles have existed in some form since the first true sea turtles evolved over 110 million years ago during the Cretaceous period.