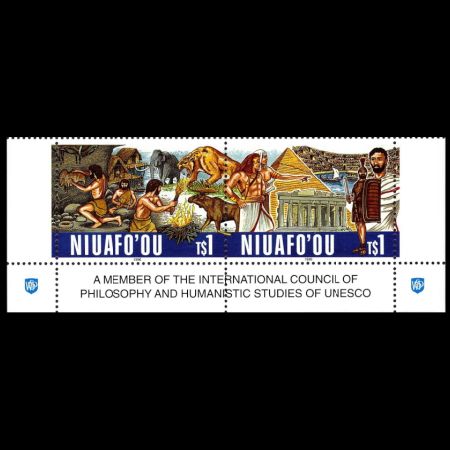 On September 1st of 1995 the Post office of the Goverment of Tonga on behalf their Niuafo'ou Island, issued the set of 2 stamps "XIII Congress of international union of Prehistoric and Protohistoric science".
These stamps shows some scense of prehistoric and anticient humans life.

Tonga did not issue any imperforated stamps from this set, the only imperforated szuff known are genuine plate proofs, and come from the Walsall Security Printers archives.
Notes:

[1] Monochrome Proofs were done on thin card and in black and white by Walsall Security Printers of London UK, and were used to check the design.
The monochrome proofs were, usually, produced in amount of 20, then sent to Tonga for the officials to check. When accepted, they were sent to stamp magazines to illustrate the upcoming new issues.

[3] The "SPECIMEN" overprint in black was the normal specimen overprint done for most sets ot Tonga from 1981 to 1997.