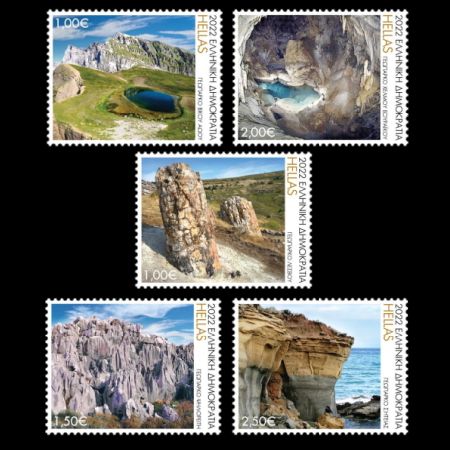 On 5th June 2022, the Postal Authority of Greece issued a set of 5 stamps "Geoparks of Greece". One of the stamps shows a pair of trunks of petrified trees in the Lesvos (Lesbos) Geopark.

Located on the island of Lesvos (North Aegean Region, Nord-East of Greece), the Petrified Forest of Lesvos is one of the most important natural heritage monuments in the world. The fossilized trees include the highest standing fossilized tree in the world, with a height of 7.20 meters and a circumference of 8.58 meters. To protect and promote the wonders of this ancient forest, the Greek state declared the area a Protected Natural Monument in 1985. It was included in the Global Geoparks Network in 2004 and it was proposed for UNESCO's Tentative List of World Heritage Sites in 2014. On November 2015 Lesvos Island has faced an ultimate recognition as one of UNESCO’s Global Geoparks.


The first references to the fossils of Lesvos can be found in Theophrastus’ works.
Theophrastus of Eressos, who was born circa 371 BC in the area of the Petrified Forest of Lesvos, was one of the greatest thinkers, scientists and philosophers of antiquity, the successor to Aristotle, and the first scientist to recognize fossils, to which he devoted special attention.
Almost 2000 years after the very first recording of Lesvos plant fossils by Theophrastus, scientific interest returned to Lesvos. In 1842 during the annual exhibit of fossils at the Landesmuseum Joanneum (today, the Universalmuseum Joanneum) in Graz Austria exhibited fossils plants from the island of Lesvos. These fossils had been collected by the Archduke Johann. What should be underlined is the fact that the Professor of Botany and Director of the famous Botanical Garden of this institution from 1835 until 1849 was Franz Unger (1800-1870). Unger described the fossilized trunks in his books on the Past World (1841-1847) and in articles describing his trip to Greece (1862). Unger’s publications inspired large numbers of researchers to visit Lesvos and the Petrified Forest in the 19th century to study the fossil site.

The forest consists of hundreds of fossilized trunks. These trunks are found in both standing and downed positions. The trees include both coniferous and fruit-bearing trees. The fossils are scattered over an area of 15,000 hectacres within the protected region. The fossils are found embedded in layers of volcanic rocks including lava flows and ash deposits. The Lesvos Petrified Forest constitutes a fossilized forest ecosystem. It flourished in the Aegean region during the Burdigalian Age, in the Lower Miocene, approximately 18.5 million years ago. This forest was a mixed sub-tropical forest with a wide variety of vegetation, mainly conifers and fruit-bearing trees, which formed consecutive vegetation zones according to the morphology of the landscape.
During the Miocene, the whole Aegean area was a terrestrial landscape. Intense calc-alkaline volcanism formed a series of volcanoes. This volcanism is related to the subduction of the African plate under the Eurasian plate. During eruptions, plant material was buried by volcanic ash and lava - burying the fossils allowing them to be fossilized.

Fossils of 25 species of conifers and 5 species of angiosperms concerning the wood occurrences while the foliage findings showed exactly the opposite with the majority of the leaves species belonging to angiosperms were found in the Lesvos Petrified Forest Park.
These fossils have are impressed by a palette of vivid colours. Variable colours are noticed not only in fossil plants from the same locality, but within a single fossil plant itself.
Several factors affect the distribution of different colours within the fossilized plants: the nature of pyroclastic rocks and the hydrothermal solutions produced during the volcanic activity; the silicification process itself (replacement of the cell-wall structure or void-filling with silica, i.e., permineralization); the possibility of a multi-stage petrification and the subsequent mobility of chemical elements therein; the palaeoenvironmetal conditions (hydrology, pH, Eh etc.); the type of species and the variability of plant tissues within the same species.
The main colours determined are black, milky white, transparent white, green, red, orange, brown and yellow.

Acknowledgement:
Many thanks to Dr. Peter Voice from Department of Geological and Environmental Sciences, Western Michigan University, for the draft page review.