Cuba 2013 "Gigant Reptilies of the Caribbean" 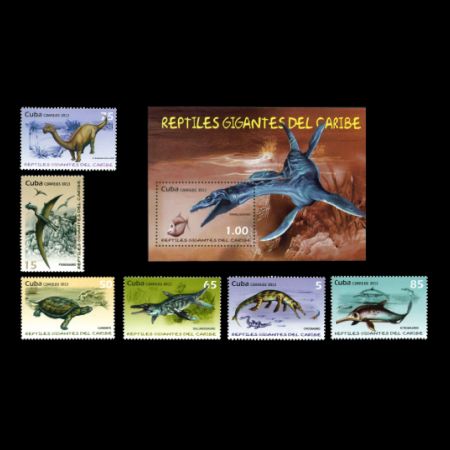 Post Aurgority of Cuba planed to issue a set of stamps shows some prehistoric animals, fossilized remains of it found on a terottory of the country, in April 2013. However, due to some technical reasons the sales of the stamps started half a year later, even thougth post mark on FDC is dated 3/4/2013.

Caribbean zone is always considered as area occupied by ammonites, ichthyosaurus and some other sea creatures in prehistoric time. Latest paleontologic discoveries shows presents of big terresial animals e.g. dinosaurs too. Fossils can still be found across the region.
The block shows Vinialesaurus , a genus of plesiosaur from the Late Jurassic Jagua Formation. The Jagua Formation is a Late Jurassic (middle to late Oxfordian) geologic formation in Pinar del Río Province, western Cuba. Plesiosaur, pliosaur, pterosaur, metriorhynchid, and turtle remains are among the fossils that have been recovered from its strata. The type species is Vinialesaurus caroli, first described as Cryptocleidus caroli by De la Torre and Rojas in 1949, and redescribed by Gasparini, Bardet and Iturralde in 2002. The authors of the 2002 paper considered Vinialesaurus distinct enough from Cryptocleidus to warrant its own genus. The name Vinialesaurus honors Viñales, the town in western Cuba where the fossils of Vinialesaurus was discovered. (The Viñales Valley has been listed as a UNESCO World Heritage Site since November 1999, for the outstanding karst landscape and traditional agriculture as well as vernacular architecture, crafts and music. On of the atraction of the village is Museo Paleontológico ) These fossils consist of a mostly complete skull, jaw, and portions of the vertebrae.