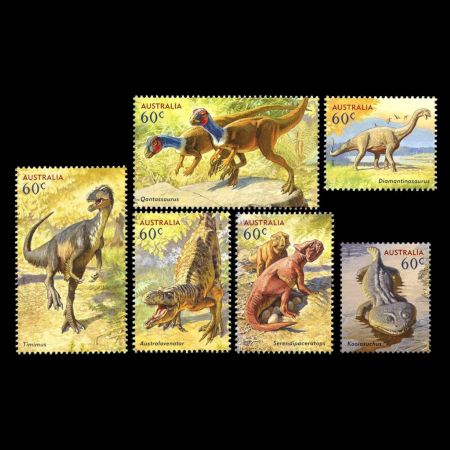 
This istamps have been developed with the assistance of palaeontologists at the Museum of Victoria and expert dinosaur illustrator, James Gurney (New York, USA), who already made some dinosaur stamps for USA's Post in 1997 The "Australia's Age of Dinosaurs" stamp issue was not the first scenic dinosaur minisheet that Australia Post produced. Artist Peter Trusler created this landmark stamp scene in 1993, called "Australia's Dinosaur Era." This was one of the ancestors of the current stamp issue, as well as the inspiration for the "World of Dinosaurs" stamps, which James Gursey created for the USA four years later.
Distingushied from many other stamp illustrators, who are not really care how realistic their prehistoric creature are looks, James Gurney spent much effort to paint his images as realistic as possible. Short film about his wotk on the stamps is below.