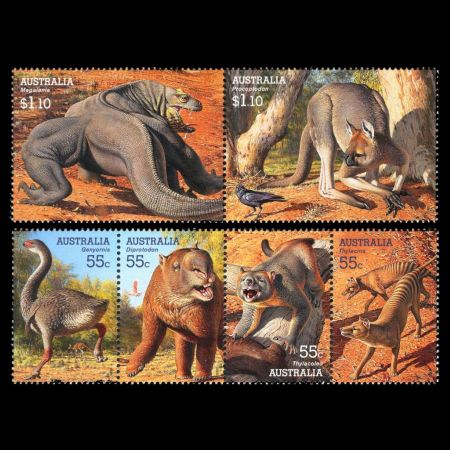 This issue focuses on Australias megafauna an extraordinary range of giant creatures that roamed the Australian continent many thousands and even millions of years ago and became extinct between 20,000 and 50,000 years ago (with the exception of the Tasmanian Tiger). Many of these animals, including the marsupial lion and the large kangaroo, briefly co-existed with humans a
fact, some scientists hypothesise, that may have contributed to their extinction. Others hypothesise that climate change may have caused their extinction, although this argument does not account for the fact that megafaunal species survived two million years of climatic oscillations, including a number of arid glacial periods, before their sudden extinction.

Noted Australian artist Peter Trusler has a long and close working relationship with Professor Pat Vickers-Rich, the consulting palaeontologist on this stamp issue. In 1993 a similar collaboration occurred when Peter illustrated the stamp issue Australias Dinosaur Era and again in 2005 with Creatures of the Slime, the first living creatures.