Fossils on stamps of Mauritania


Contents:
Mauritania, officially the Islamic Republic of Mauritania, is a country in the Maghreb region of western North Africa. It is ordered by the Atlantic Ocean to the west, Morocco and the remnants of Western Sahara in the north, Algeria in the northeast, Mali in the east and southeast, and Senegal in the southwest.
The capital and largest city is Nouakchott, located on the Atlantic coast, which is home to around one-third of the country's 3.5 million people.
It was a constituent part of French West Africa from the mid-19th Century until it achieved independence in 1960. [R1]

The first stamps of independent Mauritania were issued on January 20, 1960. Since independence, Mauritania has issued a moderate number of colorful stamps, usually in denominations intended for normal postal purposes.
Topics range widely, from internationally renowned personages, international organizations, wildlife and marine animals, sports, aviation, etc.
The French African CFA franc was in use until 1973, when a new currency, the ougouya (UM) was introduced at a rate of 1 UM = 5 fr. CFA, resulting in stamp issues in the new currency.
Some stamps are surcharged after currency change. [R2]

Other stamps of Mauritania to consider


Notes:
[O1] The stamps from the set issued in sheets and Souvenir Blocks. 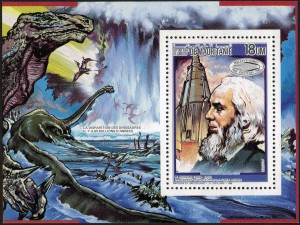 One of these blocks shows astronomer William Huggins (1824-1910) on the stamp, who was an English astronomer best known for his pioneering work in astronomical spectroscopy together with his wife Margaret Lindsay Huggins.
Another object on the stamp is Ariane rocket. This rocket launched Giotto spacecraft on July 2nd 1985. The purpose of the Giotto mission was to study Comet Halley during the comet's perihelion passage in 1986.