Dinosaurs and other prehistoric animals on stamps of Bhutan

Bhutan, officially the Kingdom of Bhutan, is a landlocked country in South Asia at the eastern end of the Himalayas. It is bordered to the north by China and to the south, east and west by India. To the west, it is separated from Nepal by the Indian state of Sikkim, while farther south it is separated from Bangladesh by the Indian states of Assam and West Bengal.
Bhutan's capital and largest city is Thimphu. Bhutan has remained an independent nation for centuries and the territory was never colonized in its history.
Bhutan's state religion is Buddhism. Population, as of 2015 is estimated to be 770,000 people. Hinduism is the second-largest religion. In 2008, Bhutan made the transition from an absolute monarchy to a constitutional monarchy and held its first general election. [R1]

The first postage stamps of Bhutan were issued in 1962, the same year that the first motor road was opened. Before that there was a mail delivery system in place for official mail using mail runners, and between 1955 and 1962 revenue stamps were accepted as payment for internal mail. From the first issues on, Bhutan had two goals with its postage stamps: to introduce Bhutan to the global community and to provide revenue, especially from foreign sales. Since the middle 1980’s, the country has been a client of IGPC who produces many topical stamps on behalf of Bhutan. The biggest annual amount of stamps produced in 1999 - almost 350 (!) [R2] So far only one set of prehistoric animal stamps issued in Bhutan - 1999 set of 3 mini-sheets and 4 blocks "Prehistoric and modern Animals"

Official stamps of Dahomey related to Paleontology: dinosaurs and other prehistoric animals


Notes:
[1] This set contains mix of prehistoric and modern animals.
Opisthocomus hoatzin, for example, shown on dedicated block, is a species of tropical bird found in swamps, riparian forests, and mangroves of the Amazon and the Orinoco Delta in South America. Some more modern animals can be seen on a mini sheet with "elephants".
Moreover, Pteranodon, shown on a dedicated block, is mis-labeled with the name Triceratops. Triceratops is one of the most famous dinosaurs, is shown on a different dedicated block of this set as well as on one of the stamps in one of the sheets. 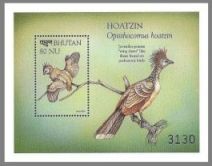 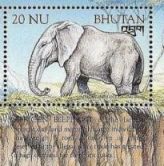