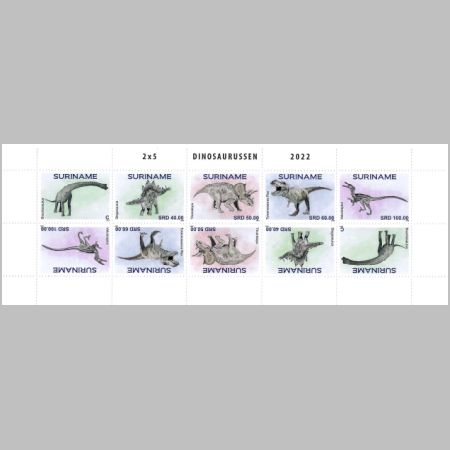 On November 2nd, Post Authority of Suriname issued their first stamps set of "Dinosaurs".
These stamps were issued as mini-sheets consisting of 2 rows of 5 stamps. One interesting quirk of these stamps is the second row is flipped. The total face value of the stamps set is 316.50SRD equivalent to €11 about. It seems too expensive for such a poor country as Suriname, with per capita of approximately $8,323.

Moreover, none of these dinosaurs depicted on these stamps have been found in Suriname: Most of the rock record of Suriname is Precambrian in age - much too old for Dinosaurs. In the northern part of the country, there are some Late Cretaceous and Cenozoic rocks - the Late Cretaceous rocks could host dinosaurs - but they would likely be more closely related to South American dinosaurs and not the animals found in western North America and Mongolia.