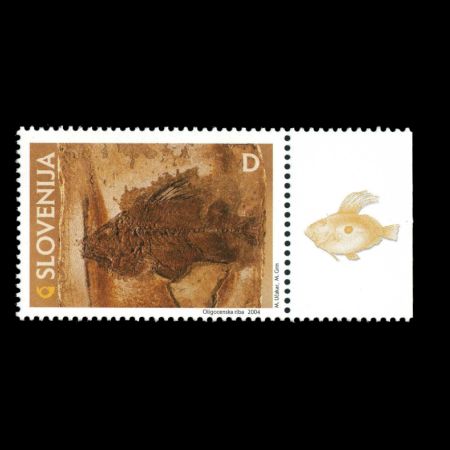 Almost 20 years ago, geologists of the Geological Survey of Slovenia from Ljubljana discovered a bony fish in Oligocene strata in the vicinity of Slivje near Olimje, Slovenia. This finely preserved fossil fish is 21 cm long and has distinctive bony dorsal and pectoral fin spines. The fossil also has traces of skin preserved. Its head is somewhat flattened, but well preserved. The fossil was discovered in the stratified marl during the road construction. Also discovered nearby were numerous scales, small fish, the remains of plants and minute fossils – Coccoliths suggesting sea environment, since they live exclusively in the sea. Although the fossil is relatively well preserved, it has elicited much discussion as to its true identity.In 1986 it was described as Zeus robustus. This species was first described in 1891 by the Croatian geologist D. Gorjanovič. However, a couple of years ago, an expert on the family Zeusidae established that the fish does not belong to the genus Zeus. As a result, in 1998 A. Ramovš corrected its first classification in the Slovene scientific publication Proteus and wrote that the fish belongs to the genus Lates without indicating the name of species. Some believe that the fish could also belong to the genus Serranus. The specimen is kept in the collection of the Department of Geology and Palaeontology, University of Ljubljana. Since its true identity has still not been confirmed, it will continue to be designated as Slovene fish from the Oligocene age.