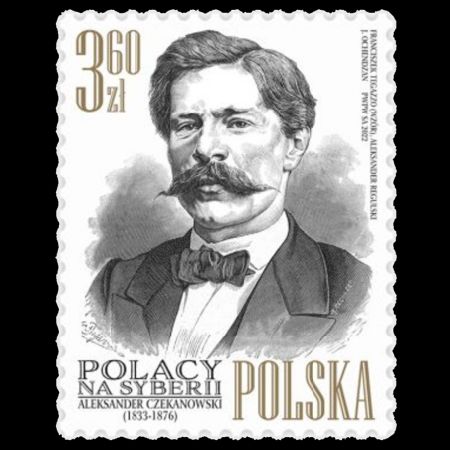 On May 23rd 2022, Post Authority of Poland issued a stamps "Poles in Siberia - Aleksander Czekanowski".

Aleksander Piotr Czekanowski (12 February 1833 – 30 October 1876) was a Polish geologist, paleontologist and explorer of Siberia. He was born on 12 February 1833 in Krzemieniec, Volhynia.

Shortly after the birth of Aleksander, his family moved to Kiev (today, the capital of Ukraine). In 1850 Aleksander began studying medicine at the Faculty of Medicine in Kiev. After graduating with a diploma in medicine in 1855, Aleksander realized that he did not like medicine. The 25-year-old Czekanowski moved to Dorpat University in Tartu (a city in modern Estonia) to study mineralogy.
During his studies in Kiev and Tartu and his later period of employment, Czekanowski carried out studies in the natural sciences, collecting geological and paleontological materials, including rich paleontological material from the Baltic Paleozoic and organized the mineralogical collections of the university.

During his exile in Siberia between 1863 and 1875, Czekanowski made many important paleontological discoveries. His monograph on the Irkutsk province (Eastern Siberia), published in 1872, was awarded a gold medal, and the collections collected in Ust-Baley formed the basis of the famous work on the Jurassic flora, written by professor Geer of the University of Zurich.

Several genera and numerous species of plant and animal fossils, as well as four present–day plants, are named after him.
In addition, a Mountain range (the Czekanowski Mountains) 320 kilometers in length near the Lower Glensk is named after him. A mountain in the Chamar Daban Range near Lake Baikal also bears his name - Czekanowski Peak.
For more details, please click here.

The postmark from the FDC shows an Ammonite.


Acknowledgement:
Many thanks to Dr. Peter Voice from Department of Geological and Environmental Sciences, Western Michigan University, for the draft page review and his valuable comments.