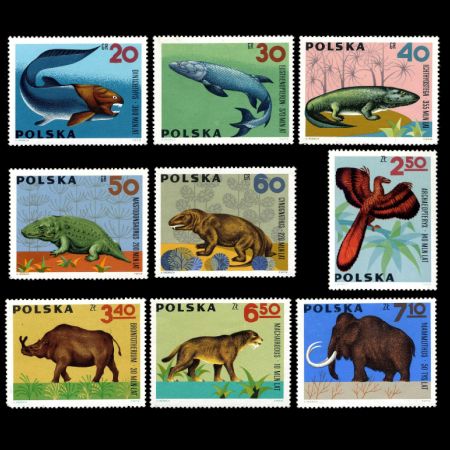 In March 1966 the Ministry of Posts and Telecommunication issued multicoloured set consisting of nine stamps representing fossil animals vertebratae. These stamps shows major stages of vertebratae animal evolution, starts on Devonian fish Dinichthys, through first, primitive amphibian till well recognized Mammuthuss. This set is issued just one year after since the first Polnish stamps depicting dinosaurs are printed out and two years before Polnish Paleontologist start dig into Gobi desert together with their Mongolian colleagues. During several common Polish-Mongolian expeditions many dinosaurs fossils are found, some of them are on show in museums in Poland and even depict on stamps issued in 2000. Illustrations of famous Czechoslovakian painter Zdenek Burian are issued for these stamps.

Descriptions of animals served under development by Dr. Andrew Sulimskiego. (the text above is original stamp description from 1966, might be obsolete)