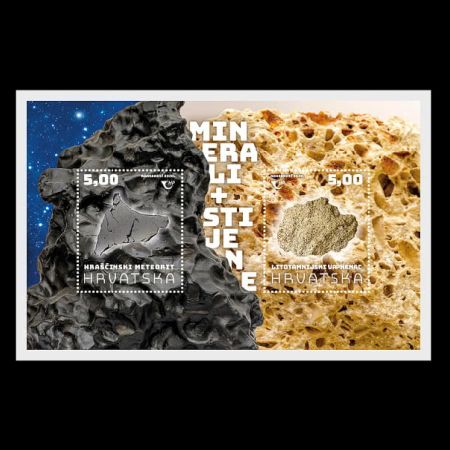 On October 22nsd 2020, Post Authority of Croatia issued a block with two stamps dedicated to Minerals and Rocks of the country.


The study of rock formation and classification is called petrology, and the study of minerals that the rocks are composed of is called mineralogy. Rocks form the solid outer shell of the Earth, known as the lithosphere, which consists of the crust and the solid outermost layer, and reaches up to 100 km in depth. The mantle extends to the depth of 2900 km underneath the lithosphere, and the core continues to the centre of the Earth, to the depth of 6370 km.
Rocks are aggregates containing one or several types of minerals. Minerals are the products of natural physical and chemical processes and are characterised by a specific chemical composition and crystal structure, which is stable at certain temperatures and pressures. The minerals’ regular internal structure reflects on their external form too. Such regular types of minerals are called crystals.
In terms of formation, rocks are grouped into igneous, sedimentary and metamorphic. Igneous rocks account for about 95% of the lithosphere, and the other two types account for the remaining 5%. Rocks composed of a single mineral are referred to as monomineralic, and rock composed of several different minerals as polymineralic.
There are more than 4,700 known minerals today, which are grouped into 14 classes by their chemical composition and structural properties: native elements, sulphides, sulfosalts, halides, oxides and hydroxides, carbonates, nitrates, borates, iodates, sulphates, phosphates, arsenates and vanadates, wolframates and molybdates, organic compounds, and the large group of silicates, which make up more than 95% of the Earth's crust.

Along with Triassic dolomites, Lithothamnium limestone forms a unique karst zone on the west side of Mount Medvednica. Even though karst phenomena on Mount Medvednica are mostly hidden under younger Holocene deposits, many karst forms such as caves, pits, sinkholes and karst valleys are still present in this zone. Mount Medvednica is home to the famous Veternica Cave, one of the longest in Croatia, with its many canals totalling more than 7000 metres in length, the Ponikve karst field and other karst forms in the areas of Horvatove stube and in the limestone sections of Lipa and Rog.

Lithothamnium limestone is one of the most commonly used building stones in the City of Zagreb and was used in the portals of many of its buildings, parts of the arcades at the Mirogoj Cemetery, and the Zagreb Cathedral, dedicated to the Assumption of the Blessed Virgin Mary and Saints Stephen and Ladislaus, which was built in its present form after the devastating earthquake of 1880. Lithothamnium limestone for the construction of the Cathedral was brought from the Gornje Vrapče and Bizek quarries in immediate vicinity of Zagreb, which are now closed, and further stone extraction has been banned in these locations.
A number of buildings were damaged when Zagreb and its surroundings were hit by a strong earthquake on 22 March 2020, including the Zagreb Cathedral, whose southern spire collapsed, and the northern spire shifted and destabilised and had to be removed so as not to collapse too. The damaged spires of the Zagreb Cathedral thus became the symbols of the earthquake that caused an immense material damage. It will be a while before they are reconstructed, like the rest of the city.

The Hraschina Meteorite The Croatian Natural History Museum's collection of extraterrestrial materials (meteorites) comprises some fifty exhibits from all over the world, but specimens that fell in Croatia (Hrašćina, Miljana and Dubrovnik) are of special interest. The Hraschina Meteorite, also known as “The Zagreb Iron”, has a special place in the collection.

This iron meteorite fell in the village of Dumovac near Hrašćina in the region of Hrvatsko zagorje on 26 May 1751 at about 6:00 pm. Meteorites are fragments of a space object, such as a comet, asteroid or meteoroid, which survive the passage through the atmosphere and fall on the Earth’s surface. Meteorites are divided into three main groups: irons, stones and stony-irons. Unlike stony meteorites, which resemble the Earth’s rocks, iron meteorites have a higher nickel concentration than the iron found on Earth. The Hraschina Meteorite played the key role in discovering this fact. Vienna-based factory owner Alois von Widmannstätten tested the Hraschina Meteorite by etching a polished slab of the meteorite with nitric acid, which brought out lattice-like patterns. The patterns (lamellae) that have since been used as the basis to differentiate between terrestrial and extraterrestrial iron are called Widmannstätten patterns, and they occur due to the separation of the mineral kamacite (Fe and up to 7% Ni) and taenite (Fe and 25-40% Ni).

The Hraschina Meteorite is also important because its fall was recorded in the first official report about the fall of a meteorite in history. The report written by the Vicar General of the Zagreb Diocese Vuk Kukuljević on 6 August 1751 details how a ball of fire appeared in the eastern sky, and then broke into two in an explosion resembling cannon fire. The two pieces trailed lines of fire across the sky and produced even stronger explosions on impact. This was the first record of eyewitness accounts about the fall of a meteorite on Earth in history, compiled at a time when any possibility of such phenomena occurring was firmly denied. The report and the meteorite are both conserved at the Naturhistorisches Museum Wien today. The Hraschina Meteorite bears inventory number “1” in one of the world’s oldest meteorite collections, which suggests that it started the collection.

An illustration in Wilhelm von Haidinger’s book Der Meteoreisenfall von Hraschina bei Agram am 26. Mai 1751 suggests that two separate pieces fell on the date in question. One weighed approximately 40 kg, and the other 9 kg. The bigger one was taken to Vienna at the request of Queen Maria Theresa herself, and the whereabouts of the smaller one are unknown. The Hraschina Meteorite owes its great significance to the fact that it occasioned the first complete description of a meteorite fall, which provided the format for all future meteorite fall reports. It was the first record of a meteorite fall in history, followed by a procession of academicians taking turns studying it and a series of discoveries that transformed the science of astronomy at the time. The fall, witnessed by a number of people, provided unquestionable evidence that rocks can indeed “fall from the sky”. The Hraschina Meteorite is thus featured in catalogues and databases across the world as the first meteorite in history whose fall was recorded in a detailed official report.
A polished slab (weighing only 0.56 grams) and a cast of the Hraschina Meteorite are on display at the Croatian National History Museum in Zagreb.

Note: Official press release text, that used as a basis of this article, written by Dragan Bukovec, B.Sc. ing. geol