On July 7, Officials at Canada Post have issued a recall on a stamp featuring Dinosaur Provincial Park, a UNESCO World Heritage Site, because of a big problem. 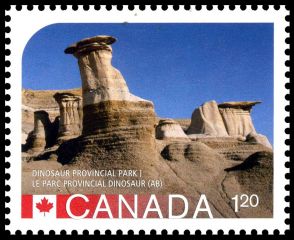 The error comes from the image used on the stamp, which is of a set of hoodoos, a rock formation found in the provincial park, located just north of Brooks, Alberta. The problem is that the image on the stamp is actually of hoodoos that exist east of Drumheller, a community about an hour and a half northwest of Brooks. Canada Post has apologized for the error and is recalling the stamps from all post offices so they can be destroyed. A new stamp, with a correct picture, issued on August 21.

Dinosaur Provincial Park, in the badlands of southeastern Alberta, contains some of the most important fossil discoveries of more than 40 dinosaur species dating back to the Late Cretaceous Period, 75 million years ago. The retreat of the last ice age about 13,000 years ago created the Red Deer River Valley, along with the hoodoos, isolated mesas and low-lying coulees of the badlands. It also left the Earth’s greatest concentration of Late Cretaceous dinosaur fossils. Since digging began in the 1880s, more than 300 dinosaur skeletons have been pulled from a 27-kilometre stretch along the Red Deer River. These remains can be found in museums around the world. For more details please clIck here