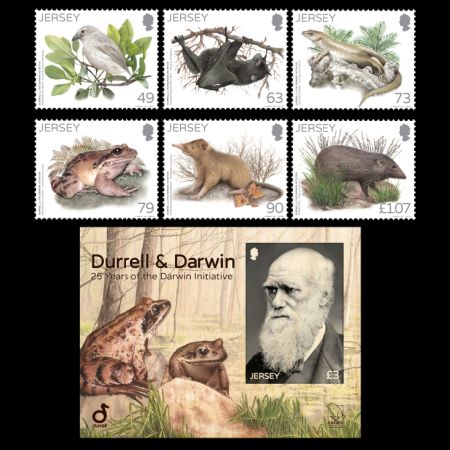 On June 14, 2017 Post of Jersey issued a set of six stamps and a block with titel "Durrell & Darwin – 25 Years of the Darwin Initiative". This stunning issue features the first Jersey stamp to printed on wood. Illustrated by Sara Menon, the animals and birds that feature on the stamps are subjects of conservation projects undertaken by the Durrell Wildlife Conservation Trust with support from the Darwin Initiative, which this year celebrates its 25th anniversary.

The Miniature Sheet, which has been printed on FSC certified sycamore, features a portrait of Charles Darwin. The fact that the wood grain can be seen through the image means that each Miniature Sheet is unique.

Durrell, Jersey's famous Wildlife Conservation Trust and Zoo, was established as an international charity by naturalist and author, Gerald Durrell OBE in 1959. The Trust is one of the Island's greatest focal points in terms of conservation and environmental projects. Its mission is to 'save species from extinction' by managing breeding programmes for release back to the wild, conducting training courses in conservation practice and animal husbandry, and by communicating important messages to visitors. During the course of its conservation programme, Durrell has partnered with the Darwin Initiative - a United Kingdom Government grants scheme that helps to protect biodiversity and the natural environment through locally based projects worldwide.

The Darwin Initiative's 25th anniversary in 2017 provides an opportunity to shine a light, both locally and internationally, on some of the projects and successes undertaken by Durrell, with six of their subjects being featured within this stamp issue. The Miniature Sheet which accompanies the stamps has been printed on FSC certified sycamore, ensuring that it comes from well managed forests that provide environmental, social and economic benefits. The stamp itself features a portrait of Charles Darwin, a source of inspiration for naturalists and conservationists all over the world. It is set within an illustration depicting Mountain chickens in the rain forests of Montserrat.