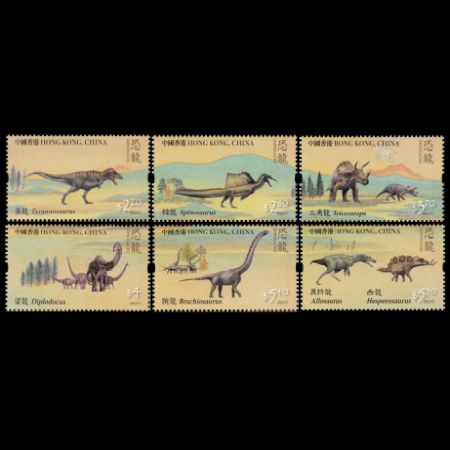 On November 15th 2022, the Post Authority of Hong Kong issued a set of six stamps, a Mini-Sheet and related philatelic products under the theme of "Dinosaurs" to showcase several species of dinosaurs from the Jurassic and Cretaceous periods.
Unlike the stamp set "Chinese Dinosaurs" from 2014, the 2022 set shows dinosaurs from North America, Africa, and Europe.

Dinosaurs are one of the most fascinating and mysterious species on earth so far. They appeared as early as 230 million years ago and went extinct 66 million years ago. They lived on the earth for more than 160 million years. Since the discovery of dinosaur fossils in the 19th century, paleontologists have been working hard to understand what these prehistoric creatures really looked like and explore the ancient world dominated by dinosaurs.
Dinosaurs proliferated during the Cretaceous period (about 145 million to 66 million years ago) and the Jurassic period (about 201 to 145 million years ago). This set of stamps includes seven species of dinosaurs, each featuring one or two dinosaur species, including Tyrannosaurus, Spinosaurus and Triceratops from the Cretaceous period, and Diplodocus, Brachiosaurus, Allosaurus and Hesperosaurus from the Jurassic period.

Fossils and reconstructions of all seven dinosaurs and a baby sauropod were on show “The Big Eight – Dinosaur Revelation” exhibition at the Hong Kong Science Museum between July and November 2022.
The exhibition aims to help visitors learn from the past to combat climate change and preserve earth’s biodiversity.
The exhibition boasts an unrivalled amount of original fossil material, some of the most complete fossil skeletons in the world, world-class artwork, cutting-edge 3D renderings and the first scientifically accurate reconstructions of the world's largest predatory dinosaur and the world's largest flying creature.
The team behind the exhibits took a unique approach to this project, blending the world of scientific research, storytelling and unique scenography to create an exhibition that reveals entirely novel scientific insights and provides immersive experiences along with some dynamic skeletal mounts.