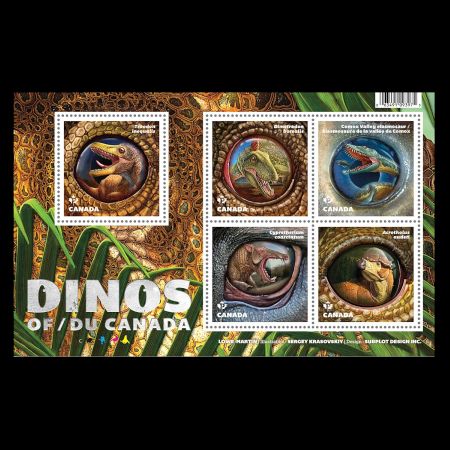 On May 26, Canadian Post Authority issued the second set of dinosaur stamps. Similar to the first issue (2015) this one also contain Mini-Sheet of 5 stamps, Booklet with 10 self adhesive stamps and uncut sheet with 7 mini-sheets.
The stylish stamps depict each animal as a reflection in the eye of a predator or in the eye of one of their own species.

"We work with experts in the field from the Canadian Museum of Nature to select dinosaurs that have been discovered in Canada," said Canada Post's media manager Phil Legault. "As with most stamp sets, we also try to select dinos that would make the most stunning and interesting images and represent as many different regions of Canada as possible". 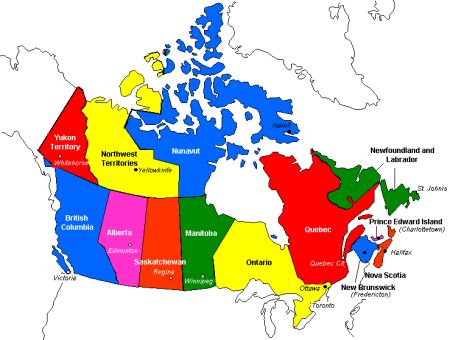 Even though the set name is "Dinosaurs of Canada", not all of the prehistoric animals featured on this year’s stamps are actually dinosaurs, but 2 fit the bill. The first is Acrotholus audeti, which roamed Alberta’s Badlands about 84 million years ago. The second, the small, feathered Troodon inequalis, inhabited the same area some 9 million years later. The creatures on the 3 remaining stamps are: the Comox Valley Elasmosaur is plesiosaurus (marine reptilie) hunted in the waters off what is now Vancouver Island (British Columbia) more than 80 million years ago. Cypretherium coarctatum nicknamed “Terminator Pig”, bared its menacing teeth to stalk prey on the floodplains of Saskatchewan some 35 million years ago. Finally, Dimetrodon borealis mammal-like reptiles lived on the arid landscape of Prince Edward Island about 270 million years ago and went extinct some 40 million years before the dinosaurs. A stylized Dimetrodon, half living creature and half bony skeleton, roams a ferny forest on the booklet’s front cover.


About design team
The stamp design work is being done by Subplot Design Inc. (Vancouver), that included Roy White, Matthew Clark, Steph Gibson
and Liz Wurzinger, while the actual illustrations are being done by Ukraine-based professional artist Sergey Krasovskiy, who is well known for his dinosaur paintings. 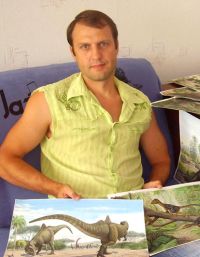 Although Krasovskiy’s work has graced the pages of many textbooks and popular magazines, including National Geographic, these are his first stamps. “When I start an illustration, I visualize it in a magazine,” explains Krasovskiy. “I couldn’t do the same with a small stamp, so I printed a stamp-sized frame to actually see the size I was working with.”
Steph Gibson came up with the idea of showing the reflection of the creature through the eyes of another. Each eye is a unique frame, so it helps to create an interesting storyline for the stamp. Who’s watching? Predator? Prey? They inspire the imagination without having to depict an entire scene,” says Roy White.
"I looked at extreme close-ups of reflections in real eyes, so I could replicate the look with realism" says Sergey Krasovskiy.
The captivating design presented some unusual challenges. The creature needed to appear as a reflection on a curved surface, making it difficult to balance the distortion in the perspective with the very technical – and scientifically accurate – details. For White, the Dinos of Canada issue comes together best when all of the products are side by side. “The repeating eye motif comes roaring back on the uncut press sheet as the eye of a hungry Tyrannosaurus rex and as the frame for a single stamp among seven other souvenir sheets.” “It’s not just an illustration to me,” adds Krasovskiy, “I enjoy the process. I hope that it reflects in my work, and that the audience feels that passion.”


Here are some sketches provided by the illustrator, Sergey Krasovskiy.
On the beginning of his work Castoroides giant beaver (extinct genus of enormous beavers that lived in North America during the Pleistocene) was planed. Later on the "beaver" replaced by Acrotholus.

On the beginning of his work, Sergey drawn the animals itself. First just grey forms, later on in color.

The next step was to draw eyes and the animals inside.

Early versions of the stamps (still with the beaver)


After many Skype calls an images exchange, illustrations for Canada's Post are finalize.


Acknowledge: Many thanks to Mr. Sergey Krasovskiy, the illustrator of these stamps for very nice conversation on facebook and for share his sketches.