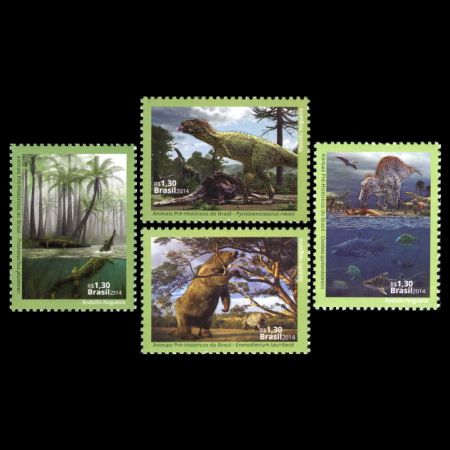 Special issue "prehistoric animals of brazil-treasures of our prehistory" is the next release of post office the post office put into circulation in all Brazil, starting from Monday (13/10), the live broadcast prehistoric Animals of Brazil-treasures of our prehistory, with expected to launch on Sunday (12/10), in the cities of São Paulo, São Luís (MA), São Raimundo Nonato (PI), and Cuiabá (MT).
The issue is a block of 4 stamps designed at paleoart, artistic branch that translates scientific data into images, and was created by the artist best miner Rodolfo Nogueira, that creates three dimensional pieces of prehistoric animals and plants. The miner's work has been exhibited at museums in Europe and the United States and the artist accounts for seven awards.


Here are original images of the stamp artist Rodolfo Nogueira


Brazil has below its surface an extensive and lush pre-history that was built and accumulated over the geological time. For an infinitely colossal time lived thousands of generations of creatures that, if not by their fossils, we would never imagine they had existed. As ancient inhabitants of this land, they survived or disappeared in large extinctions, saw the birth of South America, felt the scent of the first flowers, made our pre-history happen. Know and admire it is a
duty of all Brazilians, not only as part of the history of our country, its geography and landscapes, fauna and flora, but as our own history. For hundreds of millions of years, huge depressions of the crust on which we live accumulated sediments and debris coming from the mountains time wore off. They were
brought immersed in glaciers that remained in these lands for millions of years, in marine currents of ancient continental seas established here, by the winds of a hellish desert, or then in the fluidity of countless rivers and lakes that are long gone. Hardened by the heat from the inner Earth, by the immense weight of the column of sediment, and the chemistry of the waters that penetrated them; these sediments were transformed into rocks. Out of those we took good part of the riches which enable us to live, including plenty of water, limestone and oil. But they keep other valuable treasures, signs and traces of the rich and vigorous life that uninterruptedly dwelt these lands in a deep and remote past. In these huge packages of rock stacked by time are packaged skeletons and
trunks, footprints and traces of life that existed here in the last three major geological eras, eye witnesses of our pre-history. In recognition of this, and the work of countless generations of Brazilian geologists and paleontologists, the Brazilian Post depicts in special stamps four magnificent pre-historic creatures that once inhabited these lands.
Prof. Dr. Luiz Eduardo Anelli
Geosciences Institute of the University of Sao Paulo - USP/IGc

Presentation of these stamps took place at several places around Brazil. Image collage on the right side is from presentation at Museu de Pré História Casa Dom Aquino on Thuesday November 5, 2014 in Cuiabá city, where are many archaeological and paleontological artifacts are found. The artist Rodolfo Nogueira (young man in blue shirt) and scientific consultant and author of texts about dinosaurs, paleontologist Prof. Dr. Luiz Eduardo Anelli (seat exactly in the middle on the bottom image) presented the stamps for some scientists and visitor of the museum. After the presentation Mr. Nogueira kindly signed some covers and mini-sheets for some philatelists.

About stamp designer Rodolfo Nogueira "I am Brazilian. I reconstruct extinct animals, so I am a paleoartist. I've been also working since 1998 with various illustation techniques as color pencil, graphite, gouache, oil, watercolor, digital illustration, 3D modeling, animation and sculpture. I am undergraduated in Graphic Design at Universidade Estadual Paulista-UNESP. With the soul of a biologist, I never left the infant stage of liking dinosaurs. As an undergraduate I have developed a methodology to illustrate prehistoric animals with the detailed study of functional morphology, ecology and environment."