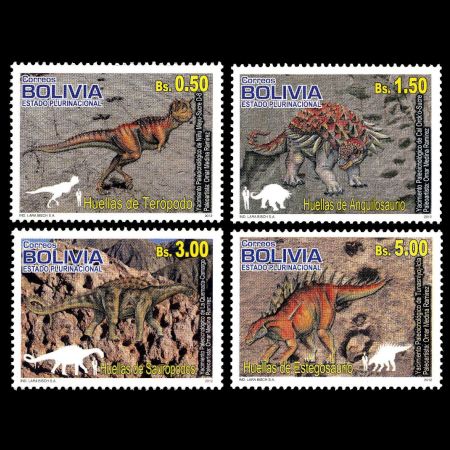 The Cal Orck'o (Quechua for Chalk Mountain) is one of three dinosaur track-sites that are competing for World Heritage status (the others are in South Korea and in Spain/Portugal). This site near the Bolivian capital Sucre is the biggest in its kind. Over 5000 imprints and 462 trackways from various different animal species have been found. They were discovered in 1994, when they were exposed by erosion on a wall disused by the nearby cement factory. The wall is 1500 meters wide and 130 meters at its highest, and contains 7 layers of track and fossil sediments.
It's believed that the rocks in the area date back some 68 million years -- well before the Andes were formed. Supposedly, there was a lake here surrounded by a forest. Dinosaurs trudged through the mud in the forest toward the lake in search of water. Before the footprints had a chance to disappear (about a 2-week time period), they would be covered by sediment, which settled over the mud and preserved the prints. Around 68 million years ago, an enormous volcanic eruption threw millions of cubic meters of ash into space. As this matter fell on the footprints of the dinosaurs, the prints were covered with a thick layer that protected them from colic and pluvial erosion. Eventually, subsequent ash deposits and sedimentary materials carried by the rivers that flowed into the lake created some more sedimentary layers that turned these footprints into rocks. The rock solid formations occurred due to the pressure exerted on them through millions of years.
At first glance, the dinosaur tracks look like simple holes in rocks. But after your eyes adjust, you'll start to see distinct patterns of movement. All of a sudden, it's very easy to envision dinosaurs slopping through the mud, trying to escape from their enemies, and searching for water. Theres also an audiovisual room on site where they show dino-documentaries (not directly related to Cal Orcko), and a small museum where you can see some footprints in close-up. And of course there are the obligatory colourful lifesize dinosaur-models that you see at dino-parks all over the world.