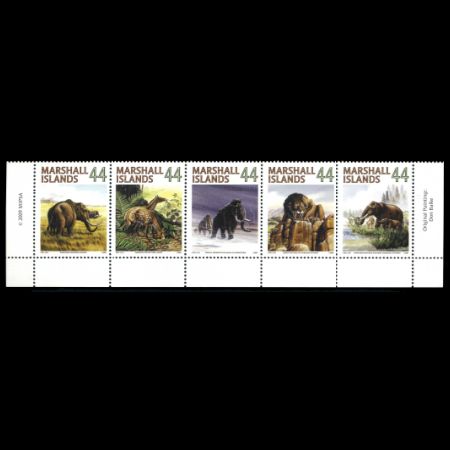 Towards the end of the Mesozoic Era about 65 million years ago, changes began to take place on Earth, resulting in the growth of mountain ranges and a colder and more arid climate. Swamplands and shallow oceans dried up, hastening the extinction of many reptilian species. These geological and atmospheric changes prepared the way for the next age of history: the Cenozoic Era, also known as the age of mammals. During this era, ancestors of present-day mammals including early elephants, horses and camels originated. Carnivores proliferated and evolved into canine and feline types of animals. While some creatures adapted very well to the changing environment, others could not tolerate the new conditions and migrated to more temperate areas. Those that could not adapt eventually became extinct.
Note: according to http://www.stampedout.nl/ Mastodon is not a genus, but the colloquial name for members of the family Gomphotheriidae. The depicting genus is probably Mammut. Eohippus should be Hyracotherium, the sabretooth is probably Smilodon.